Why did we choose “Galden Studios” as our name?

Well… I used to watch a TV show named “Crusade” (a spin-off of “Babylon 5“). One of the characters in that show was named “Galen.” He was a technomage.  Technomages use science to create the appearance of magic. I thought that idea was cool. Some time later, I started playing the computer game “EverQuest” (http://www.everquest.com). One of the first steps in that game was to create and name your character. I tried “Galen,” but that name was already taken. So I tried variations of that name and eventually landed on “Galden.” I’ve used that name in many other computer games since. 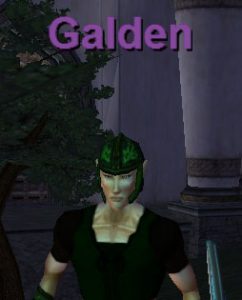 Fast forward over a decade… My wife and I were brainstorming names for the new business. She asked me for any names that meant something to me. One of the first that came to mind was “Galden.”

We added “Studios” because it sounds cool.

A more serious (although just as true) explanation: In the future, Galden Studios may be involved in many different types of projects: applications, plug-ins, web sites, games, hardware, etc.  “Studios” can encompass all of that.